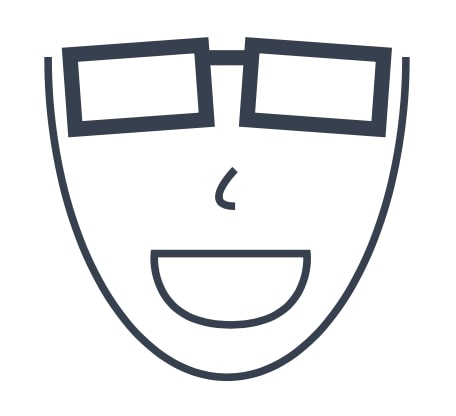 CodeStar is a service that unifies and streamlines the following AWS services to provide smooth CI/CD experience.

AWS CodeStar provides a unified user interface, enabling you to easily manage your software development activities in one place. With AWS CodeStar, you can set up your entire continuous delivery toolchain in minutes, allowing you to start releasing code faster.

CodePipeline is a managed continuous integration and development service.

AWS CodePipeline is a fully managed continuous delivery service that helps you automate your release pipelines for fast and reliable application and infrastructure updates.

If there is any build error when following the steps, it is probably caused by IAM permission issue. Check status reasons and error messages on CodeBuild and CloudFormation console. You may need to add permission for your project CloudFormation role.

Create a CodeStar web service project. You can choose Cloud9 as your IDE and CodeCommit as your code repository. It may take a few minutes for AWS to create and configure resources for your CodeStar project.

When CodeStar project is ready, you can open up the default project code using Cloud9 IDE or git clone and open it using your local IDE. 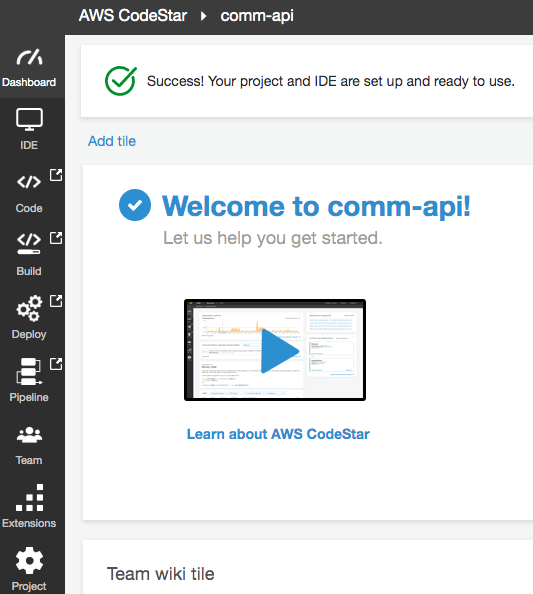 Add FunctionName: !Sub 'hello-world-${Stage}' property to the default HelloWorld function. This function name value is based on Stage parameter value.

!Sub is a CloudFormation template intrinsic function that replaces a variable with the specified value when a project is built. 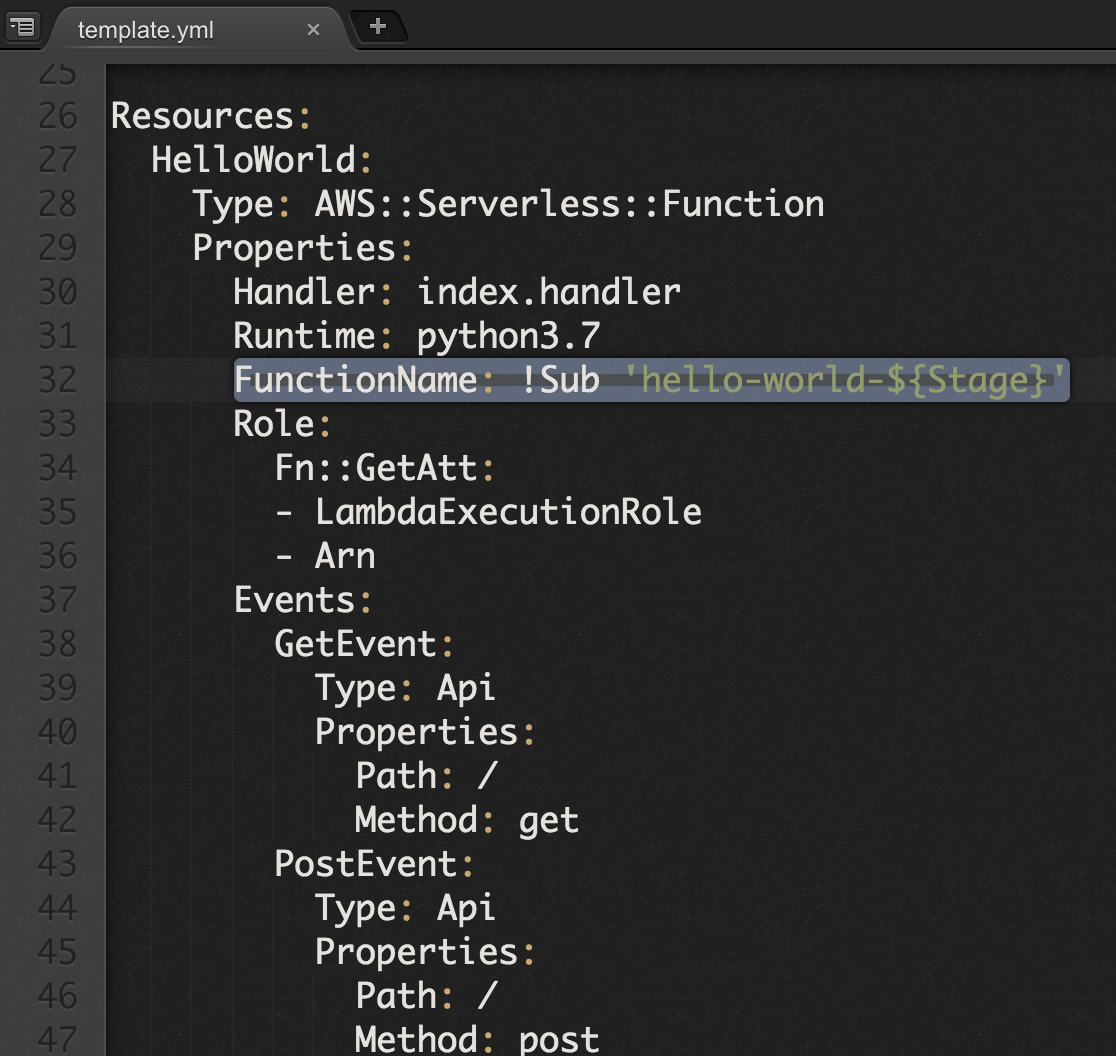 After that, run the following Git commands to push function name change and create a new Git branch for production. If you are on Cloud9 IDE, you can click + button and select New Terminal to open a terminal tab to run the following commands. 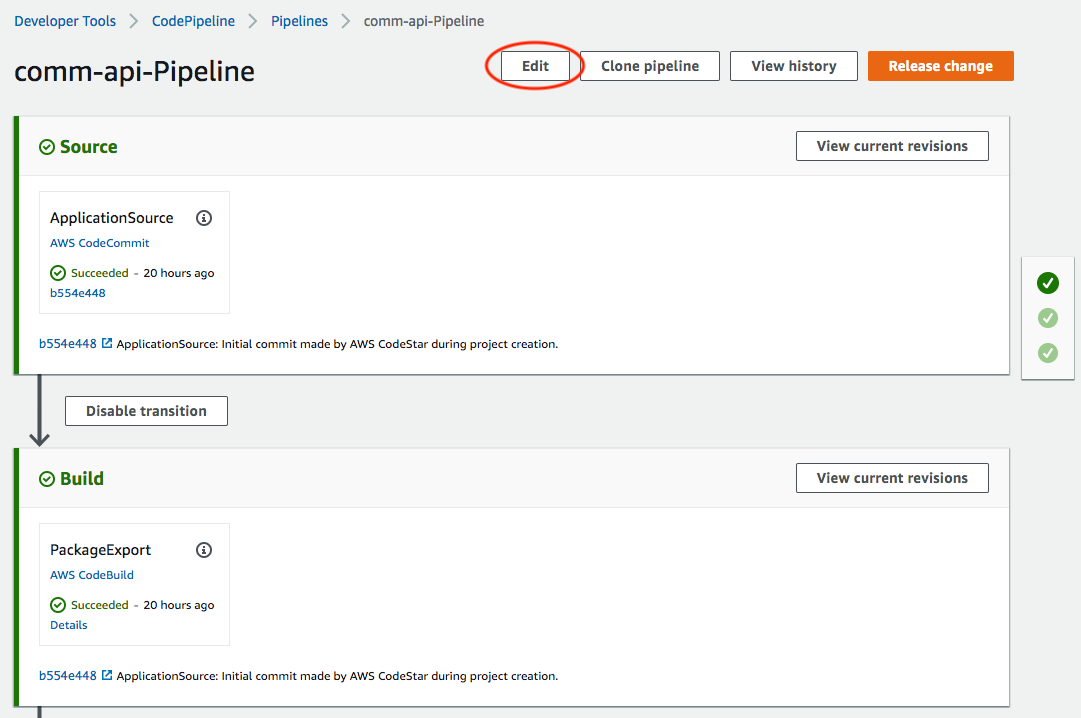 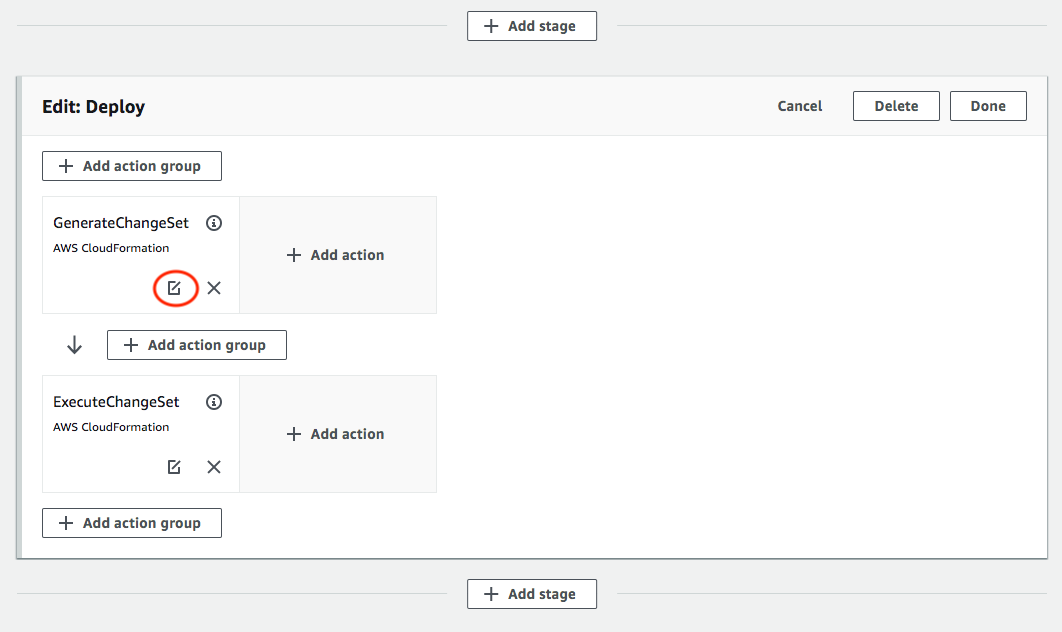 Scroll to advanced section, click the arrow icon to the left of Advanced subtitle and an input field for parameter overrides will show up. Add "Stage": "Dev" to parameter JSON object.

After that, click Done to close action menu and Save button on top to save changes.

You would see the following warning popup saying that changes saved cannot be undone when you save pipeline changes for the first time. 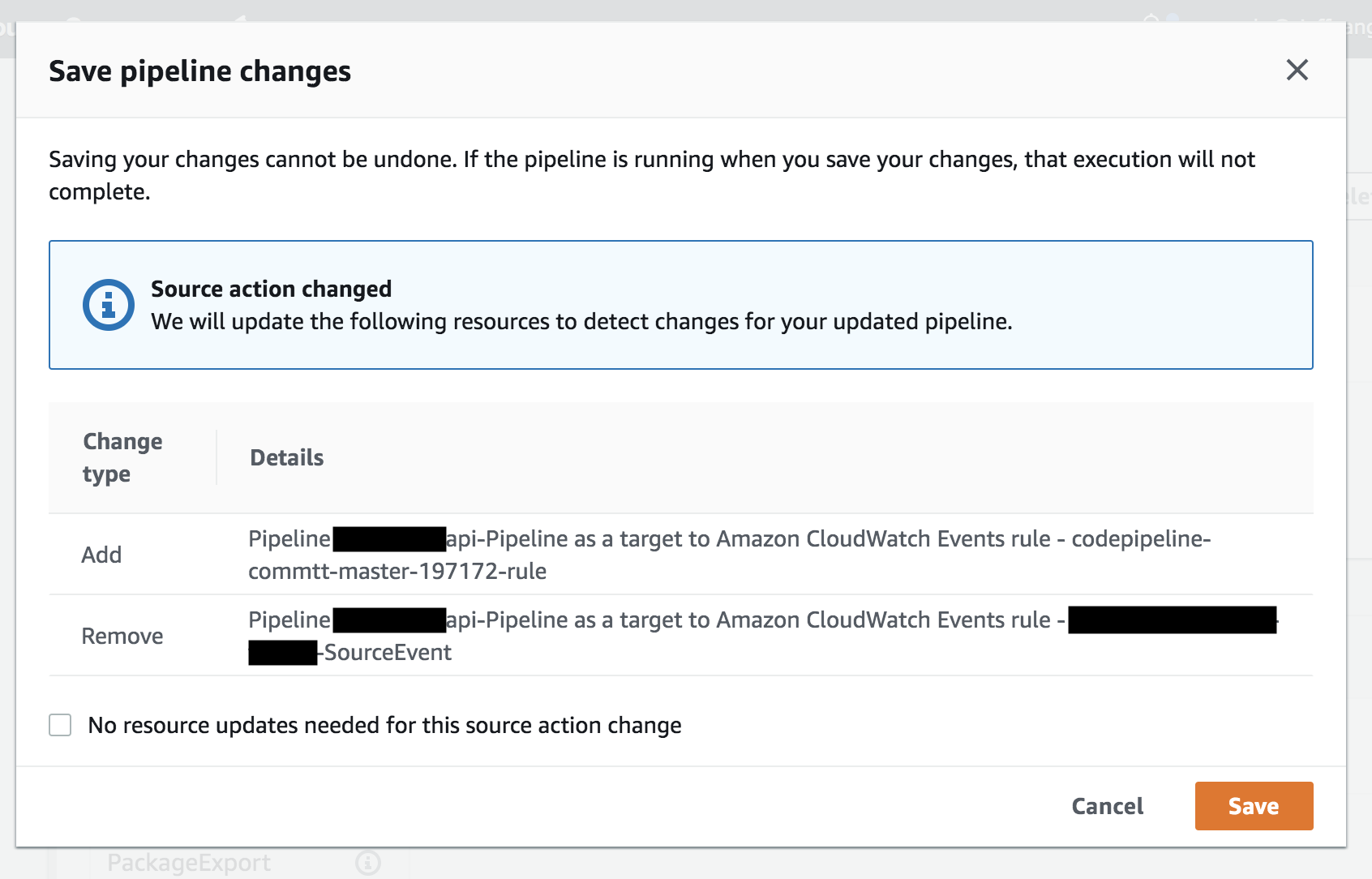 Now, development pipeline is ready. You can clone this pipeline to create a production pipeline. Click Clone pipeline button to open up clone pipeline menu. 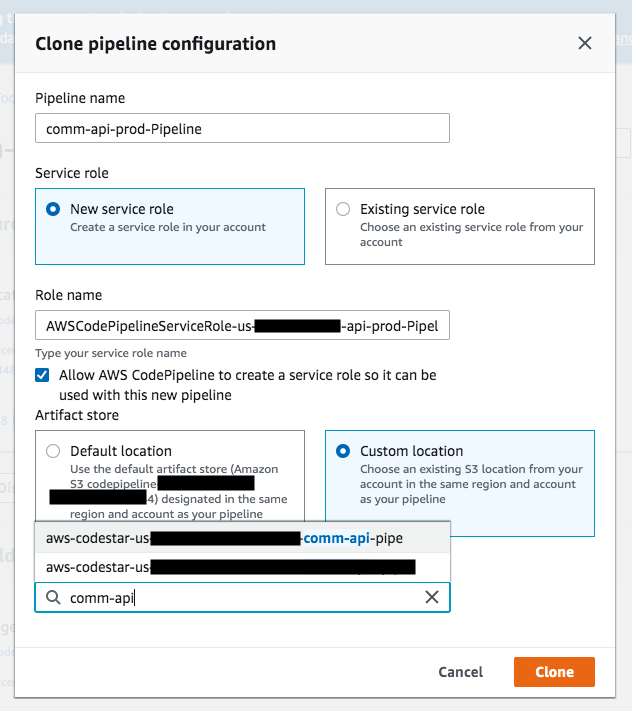 Do the following to create a production pipeline.

After production pipeline is created, configure it to make it build from prod branch.

Click Edit on top to switch to pipeline edit mode. Then, click Edit stage in ‘Edit:Source’ stage. Next, click edit button (inside red circle in the picture below) to modify ApplicationSource action.

On the ‘Edit action’ menu, look for ‘Branch name’ and change source branch to prod (it was created in step 2) to make pipeline build from prod branch. Click Done to complete the change. 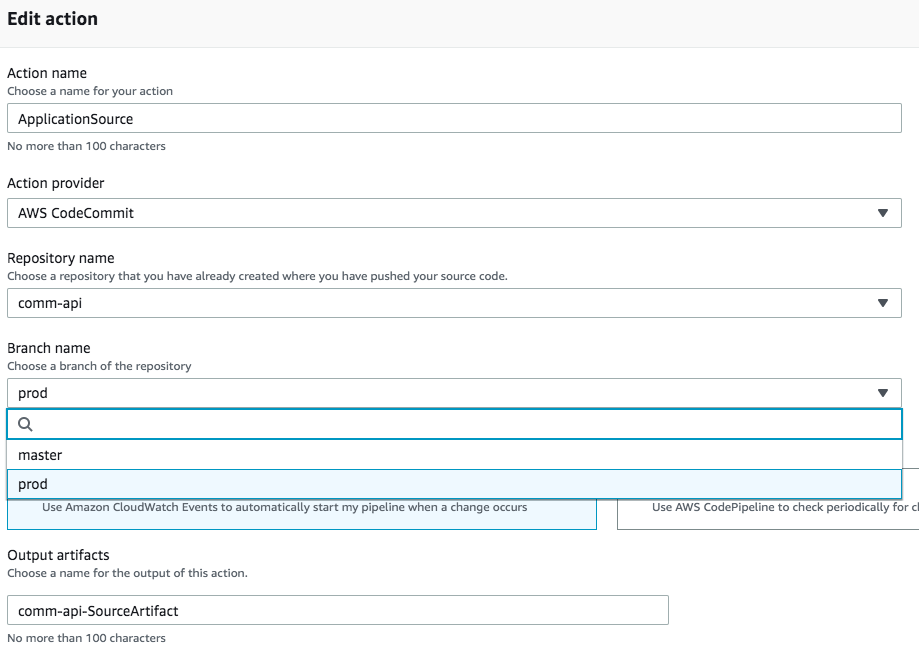 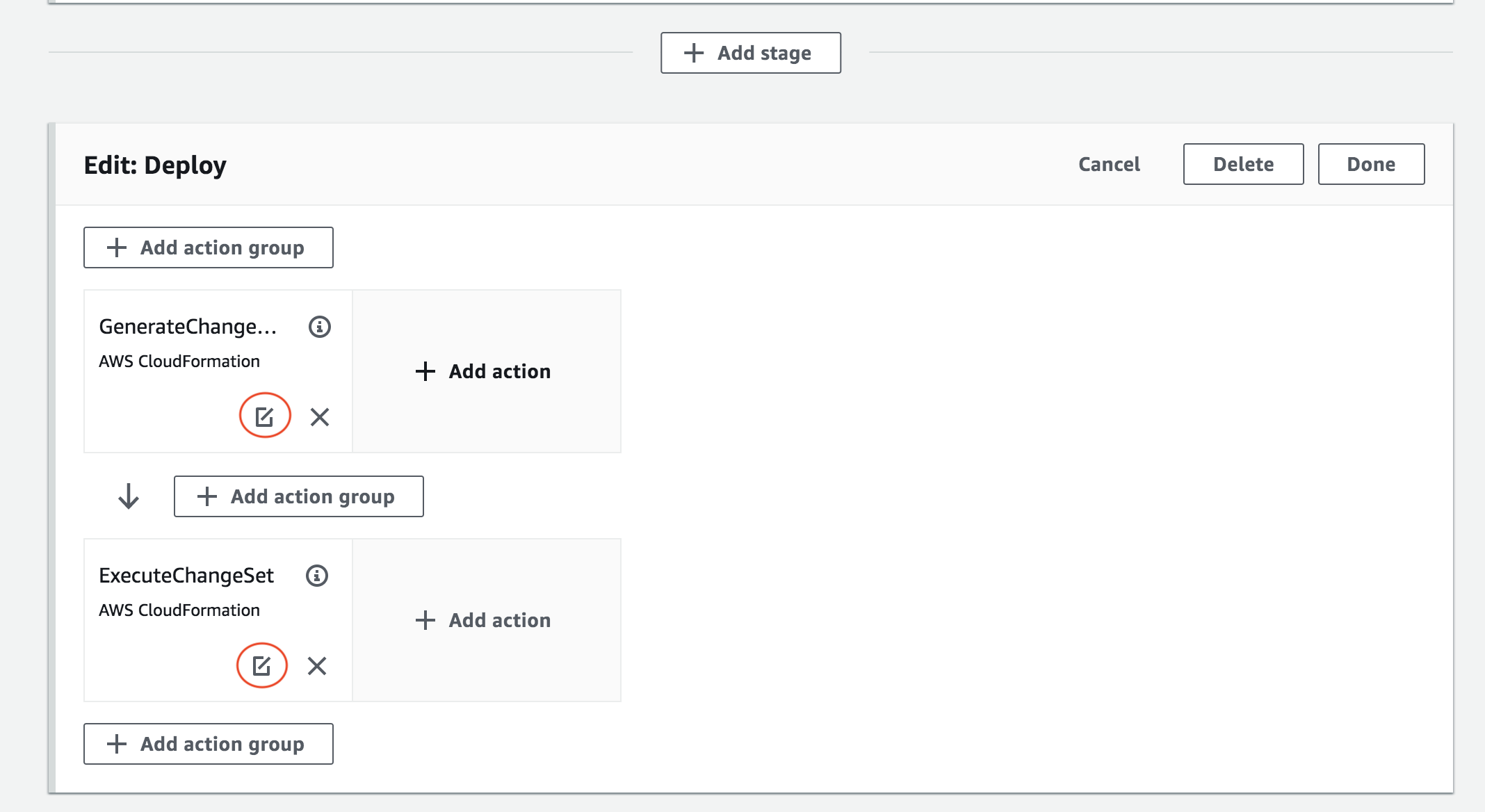 On GenerateChangeSet ‘Edit action’ menu, look for ‘Change set name’, it is somewhere in the middle of the menu.

Copy ‘Change set name’ value as you will need to paste it back later. As of June 2019, its value is pipeline-changeset.

Look for ‘Stack name’ and change its value to create a new stack. Use the same stack name as GenerateChangeSet action. After that, paste the copied value in ‘Change set name’ field.

Click Done and Save buttons to save pipeline changes.
When you save, you may see stack does not exist error like this, it is ok. A new stack will be created.

Production pipeline has been created successfully. You can test it by clicking Release change button to build from prod branch.

You can also add a manual approval stage to enable code review, prevent accidental commits and other reasons.

If you include a SNS(Simple Notifcation Service) topic ARN, users listed in that ARN will receive an email notification when approval is needed. 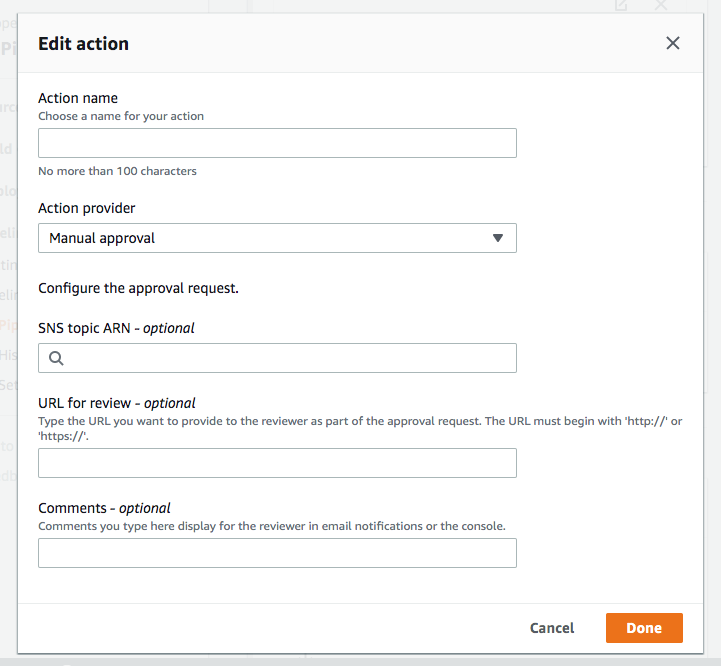 After adding an approval stage, it will appear like this on CodePipeline console when approval is needed. 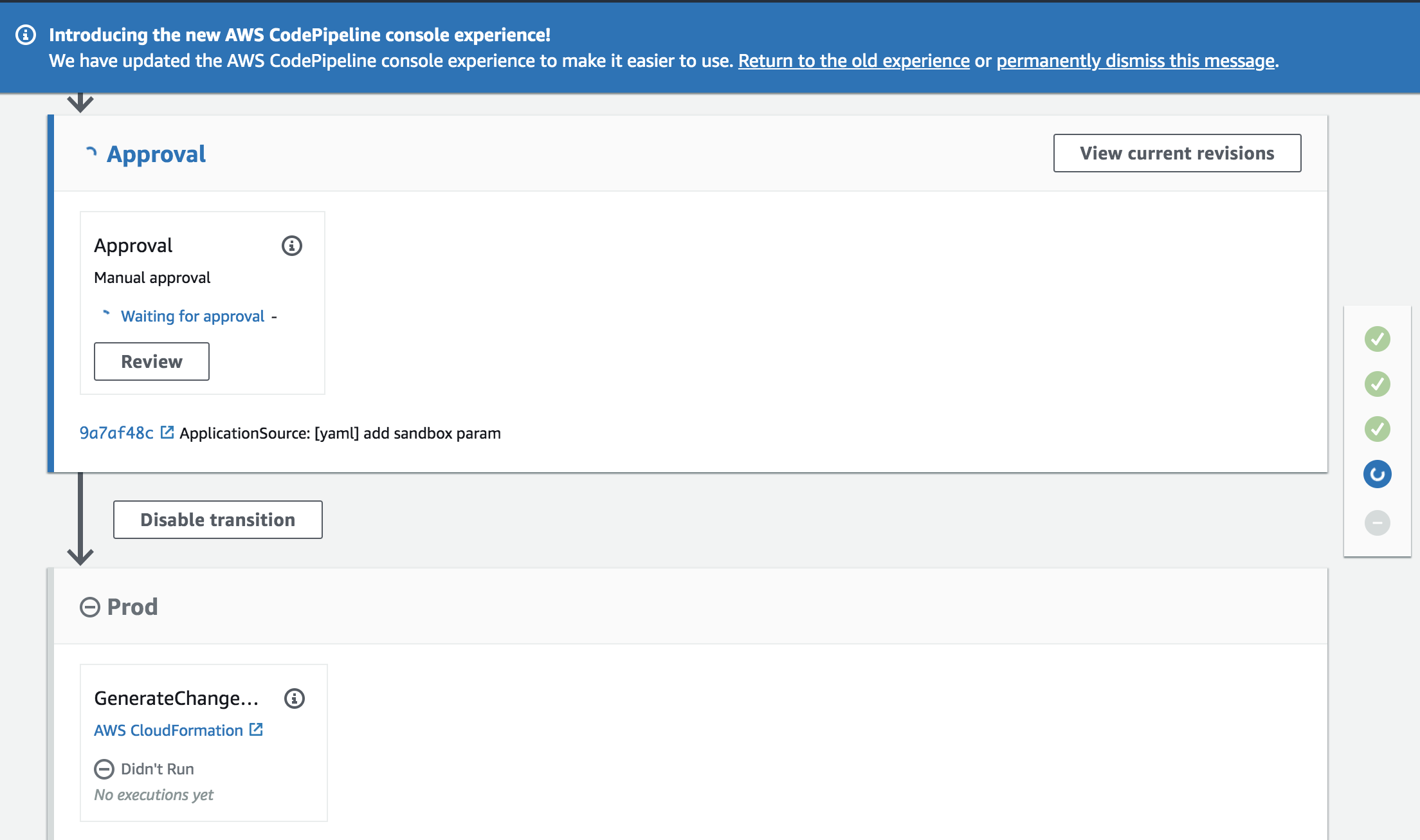 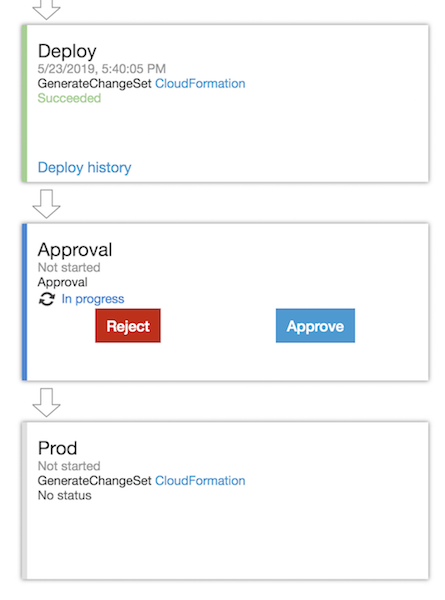 With this setup, you can develop new features, execute hot-fix and at the same time keep your production API unaffected.

Thank you for reading!

Support Jun on Amazon US

If you are preparing for Software Engineer interviews, I suggest Elements of Programming Interviews in Java for algorithm practice. Good luck!

You can also support me by following me on Medium or Twitter.

Feel free to contact me if you have any questions. 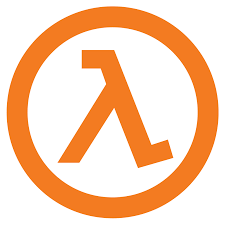 Learn how to attach a Lambda Layer to a Lambda Function using AWS SAM (Serverless Application Model) and AWS console.

Ever feel that it costs quite a bit to send money overseas. Check out this service and save money on your next international wire transfer. 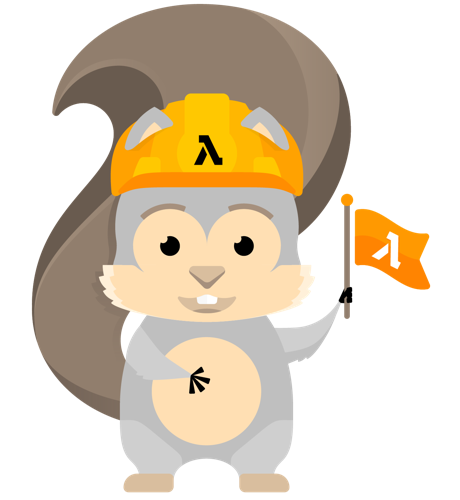 Learn how to upgrade your AWS SAM CLI using Homebrew.